Callout: For an autonomous Center! – Everything hast to be done by ourselfs!

The Autonomous Center in Cologne-Kalk exists nealy since a year. During this time thousands of guests used and created this special place in more than 250 events. The first cinema of the neighbourhood was founded, in many workshops skills were being developped, the weekly unemployed-consultation helped many people in their problems with the Unemployment-agency, concerts gave tha opportunity to local bands to make free appearances, exhibitions met their public, political groups used the house for their work – everything selforganised and uncomercial, without a cent from the city. The idea of a place, where people can enjoy and create culture without depending of their walle, found many new friends. 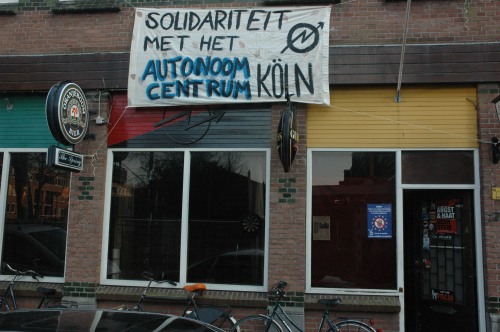 Solidarity banner at the Autonomous Center in The Hague, the Netherlands.

The squatted ex-cantine of the company KHD had been left empty from the mucinipal savings bank (Sparkasse) and abandonned to its expiration. Without the squatting the result would be more years without use. The squatters were seeking from the beginning the discussion with responsible political persons. In many conversations not only the idea of the Autonomous Center was presented, but also a plan of use and financing opened the way for a cultural center in Cologne.

The mayor named Roters and the municipal savings bank are against a meaningful utilisation of Wiesbergstreet 44. Under flimsy excuses and through desinformation of the public the Autonomous Center is to be evicted and the building to be demolished, without that further plans exist. As allready with the Barmer-quarter in Deutz, the next “most-expensivve-parkingplace-Germanys” is being prepared.

We, friends of the Autnomous Center, Leftists, Syndicalists call out for the demonstration “For an autonomous center! – Everything hast to be done by ourselfs” on Saturday 2nd of April 2011. The houses can be evicted, the builings can be replaced by parking-places – the idea for a selforganised life and culture can not be demolished!

Saturday 2n of April, 18:00, Cologne, in front of the Dome of Cologne (near the central station, station Köln Hbf)